Herbs and spices have been used in making delicious meals and in medicine for over a thousand years. There has been remarkable evidence that these tasty flavors benefit our health, especially helping to boost the health of our cardiovascular system. There have been two extensive studies directly linking spicy diets to a longer life and lower risks of cardiovascular-related deaths.

Have you ever heard of chronic inflammation? It’s a painful disorder that is the leading cause of arterial disease advancement and plaque ruptures that could lead to cardiac episodes. Chronic inflammation is reduced once certain herbs and spices are introduced into the diet. There has also been evidence that specific condiments can also help reduce cardiovascular risks once worked into your hearty diet. Below are some of the essential spices that will help you with your heart-healthy diet.

Cinnamon: Decreases cholesterol levels and blood sugar levels
Working this warm spice into your diet daily will not only help the good cholesterol (HDL) in your body but will also significantly reduce blood sugar, triglycerides and bad cholesterol (LDL) found in a recent analysis that pooled the results of 10 randomized studies of 543 patients with type 2 diabetes. A few earlier studies even showed that cinnamon also improved insulin receptiveness in people who did not have diabetes. Insulin resistance is the core cause of about 70% Of heart attacks, so cinnamon is a crucial ingredient for managing this.
Based on these findings, Dr. Angela recommends that people with diabetes or insulin resistance should consume about half of a teaspoon of cinnamon per day, which is even available currently capsule form. Before you start taking any dietary supplements, make sure it is appropriate for you by discussing it with your physician.

Chili peppers: Longer life and decrease risk of heart attack or stroke
Longevity is something that everyone wants, and chili peppers may hold the key. In a 19-year study of 16,171 American men, those who ate hot red chili peppers had a 13% lower rate of death, even when demographics, lifestyle, and clinical factors were accounted for. Death rates from cardiovascular disease or cardiac episodes were specifically low in the hot pepper sector, according to study co-author Dr. Benjamin Litternberg. Dr. Litternberg discusses another compound found in chili by the name of capsaicin, which has many proven anti-inflammatory effects. Peppers can even be used to help with arthritis and other painful inflammatory diseases.
An earlier study of nearly 500,000 Chinese people over seven years also reported lower death rates, particularly from cardiovascular disease and different cancers, for those eating hot foods, including chili peppers, frequently. Further research is still being conducted to confirm that spicy foods are the reason that the mortality rates are decreased among those who eat spicy foods.

Turmeric: Natural anti-inflammatory, antidepressant and gum disease fighter
Have you heard of the “golden spice of life”? That is what researchers call curcumin, an antioxidant compound found in the yellow Indian spice turmeric. In a recent clinical trial, curcumin supplements were found to be as effective as Prozac, a prescription drug for elevating the mood in people with major depression, a disorder linked to inflammation of the brain, and a variety of cardiovascular issues.
Curcumin is so potent that it has even been used in the fight against gum disease, which affects about 50% of the US population over 30 years old. A recent clinical trial showed that a 1% solution of curcumin was capable of killing oral bacteria just as well as a standard dental rinse(0.2% chlorhexidine gluconate) for people with gum disease. Gum disease also showed to be a significant contributor to arterial disease.

Garlic: Decreases blood pressure and increases heart health
For over 2,000 years, doctors have recommended garlic to boost heart health, and recent studies have proven that this is accurate. There have been firm evidence that eating at least half of a clove of garlic per day can lower total cholesterol levels up to 9%. According to a recent paper in Current Cardiology Reviews, taking an aged garlic extract can also reduce systolic blood pressure by about 6%.

Garlic – an essential ingredient found in many dishes from the Mediterranean- takes a stand against heart disease as there has been tremendous evidence on improving arterial health. The paper also reported that ginger, black pepper, and coriander also have significant benefits for the cardiovascular system as well as delicious taste to spice up any dish. Overall it is seen that adding some spice to your life can improve your heart’s health and reduce inflammation and risk for cardiovascular disease.

What’s a power food anyway? Is it what people eat at power lunches? Or is it just the latest form of hype? Actually, a power food is one that is a top performer at getting you healthy macro and micronutrients as well as having other compounds that are healthy and vitalizing for your body at the cellular level.  Brad Pitt or Scarlet Johannsen might eat them at a power lunch and be part of a trend.  But it would be a good trend to join in on.

Apples are one of the lowest glycemic fruits so they don’t tend to raise blood sugar much in most people. They have very healthy types of fiber in them including pectin. Pectin is very healing to the gut lining and also supportive of the microbiome, the organisms living in your gut. Apples can help to lower cholesterol as well. All the apples you eat should be organic. Insist on it for both apples and products such as applesauce since apples are always number 1 or number 2 on the Environmental Working Groups Dirty Dozen List of the fruits and vegetables most contaminated by pesticides.

After a stomach flu, food poisoning or taking antibiotics take 5 Organic Granny Smith apples, peel them and simmer them for 15 minutes. Cool and add some Ceylon Cinnamon and eat about 1 apple’s worth of what you have cooked every day. Do this three times for a total of 15 days and you will help to heal the lining of your gut and restore the microbiome to a healthier state. Taking probiotics after these kinds of challenges may also be a good idea. 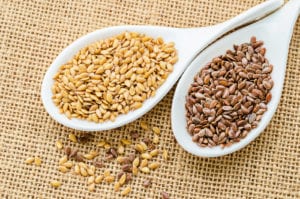 Flax seed has healthy fat, specifically a good amount of ALA – or alpha linolenic acid. This type of fat has been shown to benefit health and longevity. Flax seed lowers blood pressure. Another huge plus for flax seed is that it contains plant compounds that are phytoestrogens or estrogen-receptor modulators. This is important for two reasons:

The best way to incorporate flax seed into your diet is to grind it fresh.  We suggest buying a small coffee grinder and grinding the flax right before you plan to use it. We dedicate er for flax and other seeds and keep it separate from the one we grind coffee in just to save the hassle of taking all the fine particles out of it. Grinding the flax seed daily keeps the oil that is released in a healthy unoxidized state. The oil in the whole seeds is protected by the casing and also antioxidant compounds within the seed. Once it is ground or if you just use the oil then some of the oil can oxidize into a less healthy form. You can put it in applesauce, baked goods or smoothies. I take 3 Tablespoons of fresh flax seed, grind it and add it to a green smoothie. 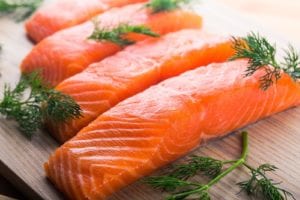 If you can get it wild is a good idea. Wild canned or frozen salmon is likely a better choice than fresh farmed salmon as some sources suggest the wild may have less chance of having higher exposure to pesticide levels. Why salmon?  Because it is one of the SMASH fish that has a very high content of Omega-3 fatty acids.

What are the SMASH fish:

Salmon is my favorite as it is rich but not overpowering in flavor. I think fish that is fresh, frozen, or canned may be safer than fish that is pickled. Cultures that eat a lot of pickled foods such as pickled herring tend to have higher incidence rates of stomach cancer. Some species of mackerel are on the high mercury content list which takes them off our grocery list.  Leaving – Salmon! A great low-carb food that has healthy fat and a good serving of healthy protein.

People who eat fish 2-3 nights a week tend to have a wide spectrum of health benefits. It is much easier to prove that eating fish is healthy for you than taking fish oil or other Omega3 oils. This may be because there are other healthy fractions such as Omega 7 in fish that you don’t get in purified Omega3 oils.

Canned salmon is easy to dress up for a party and easy to carry when you travel. I find locating healthy foods while traveling to be a daunting and expensive challenge. Throw a few cans of wild salmon in your checked suitcase – double bagged for safe keeping and eat it in your hotel or have it along with some steamed vegetables from room service. If you want to get fancy take a few travel packets of pickle relish and some seasonings you like in your suitcase too and create your own delicacies.